Four student athletes were seriously injured last week in a single-car rollover accident in Brownsville, Pennsylvania. The crash occurred last Thursday night on Route 40 when the SUV they were in hit a Jersey barrier and rolled over; all four were ejected from the vehicle. Emergency responders report finding two boys lying on the road, one against the Jersey barrier, and another walking around.

While authorities have not officially released their identities, sources report that the victims are two brothers, who are in 9th and 12th grade, one 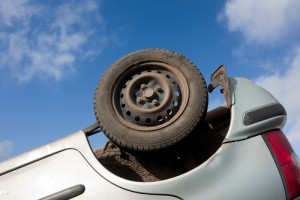 sophomore, and one freshman who all attend Brownsville Area High School where they are on the football and baseball teams. The teenagers were taken by helicopter to UPMC Presbyterian and to UPMC Children’s Hospital in Pittsburgh.

Officials have reported that two boys are in fair condition, but the conditions of the other two were not released. They are all believed to be stable at this time, Trib Total Media reports.

If you or a loved one has been seriously injured in a rollover accident that was caused by a vehicular defect or the error of another motorist, you do not have to suffer alone. A lawsuit handled by an experienced attorney can not only get you the financial compensation you deserve, but it can also hold the guilty party accountable for their actions.