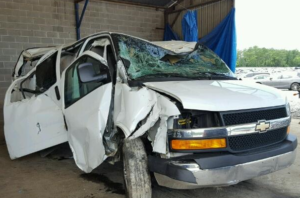 Commonly used across the country in churches, schools, volunteer groups, and more, 15 passenger vans serve as a common carrier and cheaper alternative to more expensive means of transporting groups around. The problem with these vans is the high risk of rollover accidents.

The National Highway Transportation Safety Administration (NHTSA) has repeatedly issued warnings and safety advisories about the rollover potential of these vans. Normally, a 15 passenger van’s rollover risk is similar to that of a pickup truck or SUV (which is much higher than a car). As the load increases or the amount of people riding increases, the van becomes increasingly dangerous. In fact, once there are 10 or more passengers, a 15 passenger van is three times as likely to rollover compared to lightly loaded conditions. If you have been in a van rollover, talk to SUV rollover lawyer David Willis about your right to file a van rollover defect lawsuit.

The problems with these church vans or 15 passenger vans are well documented. As more passengers are put onto the vans, and the rear space is filled with gear, luggage, or people, the center of gravity is shifted upwards and backwards. The driver of the vehicle must know that he/she is now driving a completely different vehicle than if the van were empty. Because of the shifting of the center of gravity, the vans rollover potential exponentially increases. As it shifts towards the back, the importance of the rear tires increases. Unfortunately, too many tires are underinflated or not rated for the types of loads they are put under which leads to severe tire damage or blow outs that cause the vehicle to be put into a situation where it can easily rollover. Coupled with an inexperienced driver and you have a recipe for tragedy.

NHTSA recommends if these dangerous 15 passenger vans are going to be used, that the drivers make sure every person is wearing their seat belt. They should also check the vehicles tire pressure and condition before each trip. Drivers should have experience with the 15 passenger vans, ideally taking safety courses which advise them not to ever exceed 65 mph, avoid sudden braking, keeping adequate distances between cars, and checking seatbelts periodically. Reports by insurance groups and safety departments recommend removing the back seat of the van, in an effort to keep the center of gravity where it is supposed to and eliminating 3 passengers from the load. 15 passenger vans should always be loaded from the front to the back, keeping as many passengers in the front rows as possible and leaving back rows empty where applicable. Roof racks should never be applied to 15 passenger vans as this further raises the center of gravity and increases rollover risks.

Still even with these recommendations, 15 passenger vans are not safe vehicles for highway travel under their current 15 passenger design. Even with properly inflated tires, when the van is full, rollover risk is 3x that of an empty one.

If you or a loved one has been seriously injured in van rollover, contact us at the Willis Law Firm for a free rollover lawsuit case evaluation. With over 30+ years of rollover experience, we are ready to assist you. Call Toll Free at 1-800-883-9858. No Fees or Costs to You Unless You Recovery