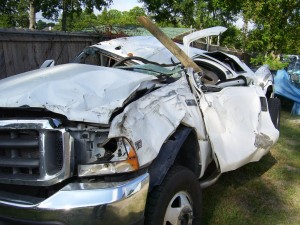 When a person or business requires a heavy-duty truck, they may consider Ford's F-350 Super Duty pickup truck. This truck, part of Ford's 1999 update of its heavier selections of F-series offerings, has proven very popular for a variety of workers, including farmers and ranchers, who are in need of a powerful pickup truck to carry cargo and tow considerable loads.

However, this immense power comes at a cost. The combined height and weight of this large vehicle puts it more at risk for rollover accidents when compared to other vehicles. Unfortunately, these rollover accidents are destructive and sometimes deadly.

Despite its popularity, the Ford F-350 Super Duty shares the same safety flaws as other heavy-duty trucks offered by Ford and its competitors. First, the F-350's cabin is considerably taller than sedans or coupes as compared to its wheel base. These trucks have high cabs in large part due to the massive engines and mechanical parts needed to produce the truck's power. While this height may seem advantageous, it actually endangers motorists, as this height drastically raises the vehicle's center of gravity.

With a higher center of gravity, the F-350 is more susceptible to rolling over while making a sharp turn or experiencing an immediate change in direction. The forces in the turn may actually cause the top of the vehicle to tip over instead of standing upright, causing a rollover. Due to its momentum, the vehicle can roll multiple times before coming to rest. In the process, the truck may be destroyed, and anyone trapped inside can be left with severe injuries.

Safety Recalls for the F-350

The F-350 doesn't receive the same sort of attention from consumer agencies like the Insurance Institute of Highway Safety or the National Highway Traffic Safety Administration as regular vehicles due to its classification as a heavy-duty truck. However, this vehicle model has undergone several safety recalls due to its risk of rolling over, namely due to tire defects.

In addition to violent rollover accidents caused by tire defects and a high center of gravity, F-350 Super Duty trucks can also experience massive roof collapses. These occur when the weight of the vehicle exceeds the roof support beams’ capacity to uphold the roof. In the case of the F-350, which is a massive, heavy truck, the weight of the vehicle may prove too much for the beams if the truck comes to rest upside down after a rollover accident.

Injuries in massive roof collapse incidents are often severe as motorists typically sustain damage to the head, neck, and spine. Beyond permanent brain damage, possible paralysis, and potentially extensive facial disfigurement, many of these rollover and roof collapse accidents end in fatalities for those involved.

A person injured in an F-350 rollover or massive roof crush accident may have the legal right to file for financial compensation for the cost of his or her injuries. If you or someone you love has sustained an injury in an F-350 rollover accident, contact the Willis Law Firm today at 800-883-9858.