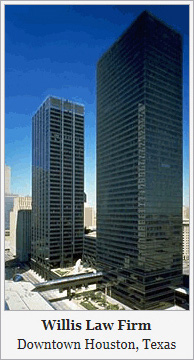 The Willis Law Firm is a Texas-based law firm with a strong national presence and recognition. David P. Willis the founder of the law firm has gained a national reputation as a leading personal injury lawyer and rollover attorney. He specializes in the prosecution of serious injury cases, involving burns, paralysis, brain damage, spinal cord injuries, traumatic brain injuries and wrongful death suits against automobile, SUV and tire manufacturers, chemical plants, pharmaceutical companies and other corporate entities. For over 30 years Mr. Willis has been personally compelled to force manufacturers to be accountable for their negligent acts, poor designs and for the sale of dangerous products that kill and maim the consumers in the United States. His educational, career and legal background includes:

After law school, Willis was selected as one only of eighteen to be briefing attorneys for the Supreme Court of Texas. While working on the Court and experiencing firsthand the inner working of the Supreme Court, Willis quickly found the area of law that he understood and that intrigued him. Willis quickly learned from studying the appellate records and briefs in these massive product liability cases on appeal, the simple fact that big corporations and manufacturers hide evidence, intentionally produce products that are known to be dangerous usually in order just to save money. Many of those corporations in fact looked at any potential problem and did what is called a “cost base analysis”, in which they determined is it cheaper to pay injured consumers in lawsuits, than to fix the problem and make a safer product.

After his briefing attorney commitment was over Willis was hired by a personal injury firm in Houston, Texas. It was there Willis handled his first rollover case as a “baby” lawyer. His wife’s co-worker had been involved in a rollover case in Arkansas and broke his neck when the roof crushed down in the rollover. The family had spoken to numerous law firms, but had been turned down as it would be a very involved product liability case against Ford Motor Company and Firestone Tire Co. The family instead hired Willis and after an initial investigation by experts a lawsuit was filed and later settled out of court. Throughout the rest of the 1980’s and 1990’s and many more rollover cases involving the infamous Ford Bronco II and the Jeep CJ and Wrangler would keep his docket busy. In fact, Willis was doing “SUV” rollover cases, before the term SUV was ever coined. Over the last 30+ years 100’s of clients and families or rollover victims along with numerous referring attorneys have associated Willis in the handling in all sorts of injury litigation and product liability case, however the majority of his practice has involved vehicle, tire and product defects over the last 30 years. 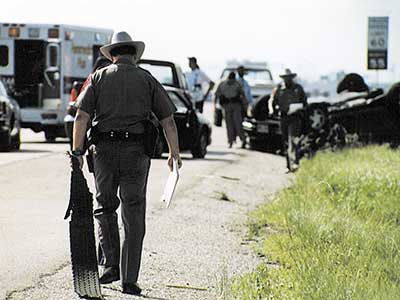 In 1997, Mr. Willis was involved in one of the nation’s first Firestone ATX Radial Tread / Belt Separation and Ford Explorer rollover cases which occurred in Texas. A products liability lawsuit was filed in 1998 against Ford and Firestone due to the Ford Explorer going out of control and rolling after the back left Firestone ATX radial tires tread came off. After a long battle with Ford and Firestone a very significant confidential settlement was reached by all parties. On July 17, 2001, Mr. Willis was recognized as one of a very select group of products liability attorneys in the nation and was awarded the prestigious Steven J. Sharp Public Service Award for his contributions in investigating and gathering evidence pertaining to tire belt separation and vehicle rollovers in Firestone Tire and Ford Explorer Cases. The efforts by Willis and a selected group of trial lawyers helped lead to the largest recall in U.S. history. This award was presented to Mr. Willis by the President of the Association of Trial Lawyers of America. 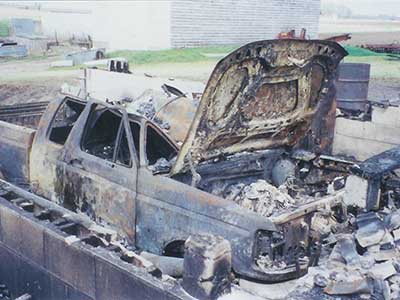 In 2005, Willis again got national attention after he was hired by the surviving members of Iowa family due to the family’s Ford F150 pickup truck erupting into flames trapping a 70 year old housewife and mother in the burning house on their Iowa farm. The family had interviewed numerous law firms across the United States, but chose Willis and his team of lawyers and experts to represent them and make sure that Ford Motor Company “got what was coming to them.” After extensive engineering and accident scene investigation and consultation with some of the top fire experts in the world, it was determined that the Ford truck’s cruise control switch was defective and caught fire in the middle of the night, killing Mrs. Mohlis. Throughout the case Willis and his team of lawyers worked with the head investigator from NHTSA and because of the incredible preservation of the evidence that took place early on, this case helped to provide the needed “ammo” for NHTSA to force Ford to recall over 8 MILLION vehicles with a similar defective condition.

"My firm is committed to representing individuals and families who have been the victims of a wrongful death or serious personal injury. Although monetary compensation cannot heal the emotional and physical scars left as the result of a serious accident, it can help in many cases to relieve much of the economic stress and hardship associated with the injury or loss of a loved one. Many times it is the only means of support and future security for the injured individual and their family. Litigation may not bring back a loved one, or heal a serious injury, but it may serve to help prevent others from having to endure the same loss."