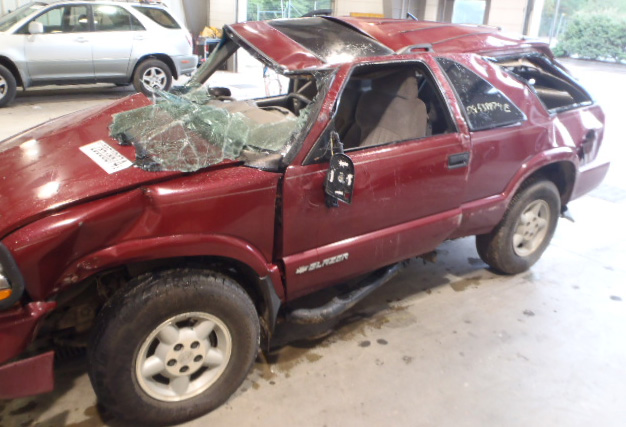 With the growing numbers of Chevy S10 Blazers and Chevy S-10 Pickups on the road, so the numbers of Blazer rollovers are increasing as well.  Rollovers are not of course confined to just SUVs, as vans, small pickup trucks and many small subcompacts rollover as well. However, the smaller the vehicles, usually the less deformation of the roof during a rollover. In fact, the mid-size and large SUV vehicles, Chevy Blazers, usually cannot withstand a rollover without serious roof crush or roof pillar collapse. The problem with most SUVs is that not only do they have weak roofs, but they for the most part are unstable as well and have a tendency to roll.

In a 1990 memo from General Motors to the National Highway Safety Administration (NHTSA) indicating that to partially strengthen the roof of the new model, 1992 S-10 Blazer; it would need a re-tooling cost plus $9.00 in extra metal, which would add 5 pounds to the overall weight of the vehicle. This simple solution could have saved 100's of lives and the American motorist if given a chance would have gladly paid the extra money to have been afforded extra protection.

The Chevy S10 Blazer is a mid-sized sports utility vehicle (SUV). Most all SUVs have a high center of gravity and can be unstable on the road, especially in quick lane changes and emergency avoidance and braking maneuvers. In these circumstances, the Chevy S10 Blazer like other SUVs can become very difficult to handle and control leading to a rollover. Although SUVs are designed to be driven off the road, very few have rollbars or other roof crush protection. And to make matters worse, few meet the National Highway Traffic and Safety Administration roof safety standards for automobiles [as weak as those standards are]. The chief hazard occurs when taking emergency action after steering in one direction and then being forced to rapidly correct in the opposite direction, such as a typical avoidance maneuver with a road hazard, a deer, a dog or even a child in the roadway. Blazer potential rollover problem combined with a tire blowout, tire failure or tire tread separation can make a Chevy Blazer very difficult to control. The result often times is a Chevy Blazer rollover. Rollover occurs because of the absence of a lower center of gravity and a wider track width, which allows most automobiles to skid, spin and recover. But when taking a common evasive maneuver that car driver’s safety complete every day, rapidly corrective action causes SUVs to trip and roll.

Another Chevy Blazer rollover situation is created when there is a sudden tire failure; either from a road hazard type blowout or from a tire tread separation. This sudden loss of control can cause the back end of the SUV, van or light truck to swing out or "fishtail", resulting in the vehicle skidding out and sliding sideways in the direction of travel. When this occurs, the vehicle can often trip and go airborne, starting the rollover. Rollovers are the most common cause of roof crush. Over 10,000 people are fatally injured each year in rollover crashes. The causal relationship between rollovers and harm to occupants from roof crush has been recognized as early as the 1930's.  Nevertheless, the automotive industry denies the relationship between roof crush and occupant injuries.

The main part of the vehicle's structural support system, the roof creates a "non-encroachment zone" or "survival space" that should protect occupants in a crash.  If a roof crushes inward substantially in an accident, occupants may suffer disabling head and neck injuries or even death. Most passenger vehicles and many SUVs do not have enough headroom to allow for more than three to four inches of crush without significantly increasing the risk of serious injury or death. NHTSA's FMVSS 216, sets the minimum strength requirements for a vehicle's roof crush resistance, but does not require manufacturers to conduct dynamic rollover tests on roofs.

In a Blazer rollover, the Blazer's roof can crush into the occupant space in several different ways. Matchboxing, pillar collapse and header collapse are the most common ways that this occurs. In most cases, a stronger roof support system would have prevented most of the serious neck, head and spinal injuries. To the untrained observer, roof pillars of most vehicles appear solid and sturdy, especially strong enough to withstand a roof crush in a rollover. The surprises come through when one looks at a cross-section of the pillar. Most are nothing more than folded/molded corrugated sheet metal, being hollow inside. Therefore, when impact occurs the metal folds over into the empty inner space allowing more folding or crushing to continue. Tests show that if the inner hollow part of the roof pillars are either filled with a high density foam or honey combed structure, then roof crush is at a minimal, thus saving lives.

When the roof collapses or invades the safety zone, then the neck fractures often occur. These result from shear and flexion forces unto the neck and spinal cord of the occupants. Roof crush injuries are caused by the energy of the vehicle in a roll creating compressive forces pushing down on the top of skull when the head is in an upright position. The compression causes a bursting fracture in the C5 to C7 of the cervical spine. This bursting fracture causes a loss of intravertebral space both anterior and posterior.

In other rollovers, the roof intruding is not the cause of injury. Another type of serious neck and head injury occurs when the occupant "dives" into the roof, resulting in the head flexing forward before receiving an impact to the top of the head. This causes the bone in cervical vertebrae to fracture, (NOT A BURST). The posterior corner of the vertebrae then impinges directly against the spinal cord resulting in loss of anterior vertebrae body height. Diving type injuries can happen to belted occupants, who for many reasons become unbelted or unrestrained during a rollover. In some rollovers, the seat belt buckles can release or unlatch allowing the occupants to be ejected or severely injured in the rollover. Seat belt defects include inertia separation / release, excessive slack, false latching and inadvertent or accidental release due to poor seatbelt buckle design.

THE ESSENTIALS TO A BLAZER ROLLOVER & ROOF CRUSH CASE

If you or a member of your family has been involved in a Chevy Blazer rollover, SUV, van, or truck rollover or  any other serious accident  and you have questions about whether the vehicle design may caused or contributed to the accident or injuries, then call and talk to us now. Call 1-800-883-9858 for a Free & Confidential Consultation or Click Here

PLEASE NOTE: The statements and information provided on this web site are for the informational purposes only. This law firm is not affiliated in any way with any trademark owner. The use of any trademarks on this site is for product identification and information purposes only .This webpage is provided to you to assist in SUV Rollover accidents, passenger van rollovers, 15 passenger van rollover accidents, recalls, truck accidents & rollovers, tire tread defects, tire separations, roof crush and roof pillar collapse, seat belt failures, fuel fed fires and other related rollover accident issues, including rollover injuries and deaths. This site is not intended to provide legal advice to the reader and NO attorney-client relationship shall be deemed to arise from the receipt this page and/or its associated pages or any oral or e-mail communication to or from with the Willis Law Firm. There will be NO lawsuits filed, claims made, letters or phone calls made for a prospective client, until that person is represented by the firm. An attorney client relationship only arises after the attorney and client have signed a written attorney client contract.

Mr. Willis is licensed attorney in New York and Texas.  He is a Board Certified in Personal Injury Trial Lawyer, certified by the Texas Board of Legal Specialization. Read more about Board Certification. Principle office is Houston, Texas.

Further, any statement or reference to past personal injury, products liability or SUV rollover lawsuits, settlements or verdicts should NOT be relied upon in one's own case or in your decision on which law firm to hire. All clients’ cases, facts, injuries, damages, venues and lawsuits are different and there is NO way to predict the outcome of a particular case, verdict of a jury or judge or the strength of a case before a judge, jury or the appellate court system. The client is responsible for all of their own medical expenses. All cases are handled on a contingent fee basis. NO attorney’s fees or case costs charged to client, unless a recovery is made for the client. Often in very serious and catastrophic injury and death cases Mr. Willis may associate with another products liability attorney as co-counsel and in other matters, the case may be referred. In cases where a legal matter is referred, Mr. Willis will continue to maintain joint responsibility with the handling attorney or lead counsel and actively monitor the progress and development of the case.  Due to his years of experience in personal injury and products liability cases, Mr. Willis will often continue to assist in working with the hired experts and engineers and in research of the defective product or other related legal matters in the case.