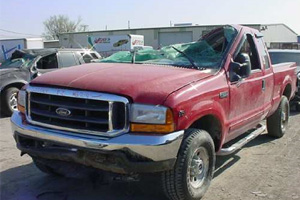 Due to the size, load and weight of a Ford F-150, in a rollover it can result in the deadliest rollovers and roof crush accidents today. During a Ford F-150 rollover, the weight of this truck far exceeds the capability of the F-150's roof supports and roof frame.
<" border="1">If the driver of a Ford F-150 truck goes off the roadway at highway speeds and quickly attempts to regain control, the truck may start to yaw or go sideways. It that case, a rollover accident is probable. The weight and momentum of a 7,000 to 11,000 lb. truck
like the F150, F250 or F350 Ford trucks are almost impossible to correct without "over-steering" or "over-correcting." Most Ford F-150 rollover accidents occur when the driver is forced to take an emergency or evasive action after steering in one direction and then rapidly correcting in the opposite direction, such as a typical avoidance maneuver with a deer, tire tread defect, a dog, pothole, road hazard, tire blowout, tire tread separation or to avoid another vehicle. Sadly, many of these normal evasive actions we take for granted in a passenger vehicle can result in a rollover in a Ford F-150 truck rollover. When such a rollover occurs in a Ford F-150, the survivability of the occupants often depends on their height and on the amount of deformation or crushing of the roof, roof pillars, roof headers and door frames. A Ford F-150 roof crush from a rollover is usually a deadly combination, especially at highway speeds.

Ford F-150 Truck Rollover Protection? - No Roll-bar and No Roll-cage

The Ford F-150, like most pickup trucks, has a higher center of gravity and can be a very unstable vehicle on the road, especially in an emergency or evasive maneuver. Although the F-150 truck is advertised as “Ford Tough”, it does not have an actual rollover cage, roll bar or other rollover roof crush protection or occupant protection to protect the driver or passengers in a rollover accident. Further, the Ford F-150, like many other trucks, does not meet the National Highway Traffic and Safety Administration (NHTSA) roof support safety standard (NHTSA-FMVSS 216) for roof strength integrity. Almost all Ford F150 rollovers involve this same weak roof often resulting in a severe roof crush, roof pillar failure and roof header failure.

While many Ford F-150 owners and occupants believe that an airbag in the F-150 rollover will keep them safe, the truth is that in most Ford F150 rollovers, the airbags never deploy. Even when an airbag does deploy in a rollover, the airbag in a Ford F-150 is not designed to protect from the roof crush or roof collapse in a F150 rollover nor does a F-150 airbag prevent side strike of the occupant’s head with the pavement or ground. 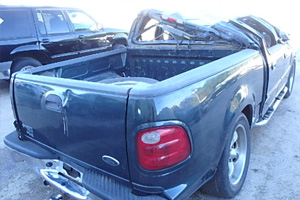 The roof structure of the two door Ford F-150 regular cab is comprised of a roof, two A-pillars and two B-pillars. On the Ford F-150 Super Duty Super Cab 4 doors, there are two A-pillars, two, B-pillars, two C-pillars and a roof structure. On the four door Ford F 150 Super Duty Supercab, an obvious problem exists. On the Ford F-150 Supercab, there is no B-pillar between the 2 doors on each side. In a F-150 Supercab Truck rollover, the tremendous weight of the truck in a rollover crushes the roof down on the extra wide door opening and crushes down much more severely than it would have if a B-pillar existed between the doors to act as a roof support. This additional force on the door latch, or lock, of the Ford F-150 forces the door lock to give and the door latch to open during a rollover, or a side collision, exposing the driver and passengers to untold dangers, injuries and death from door latch failures. Ford F-150, Ford F-350 and F-250 Supercab designed with no B-pillars between the 2 doors, can accelerate the amount of the roof crush in a roll over. Often the most severe amount of roof crush resulting in some of the most catastrophic head injuries, spinal cord injuries, suffocations, asphyxiations and deaths happens with the largest amount of roof crush deformation.

If you or a loved one has been seriously injured or killed in a Ford F-150 truck rollover accident, roof crush or any Ford truck rollover, SUV rollover or accident and you would like to know more about your legal rights in filing a rollover or roof crush lawsuit or any other potential product liability or negligence legal action, then call and talk with Mr. Willis, a Board Certified Personal Injury Trial Lawyer with over years of product liability and roof crush rollover litigation experience. Call the Ammons-Willis Law Firms at 1-800-883-9858 or fill out our Free Ford F-150 Truck Rollover Case Evaluation below.