You know the sun visor labels that warn SUV owners that such vehicles don’t handle like cars in emergency maneuvers? AutoWeek contributing editor and test-track driver Pete Albrecht experienced firsthand the seriousness of that warning on Oct. 16. He was driving a Jeep Liberty in a slalom test when it rolled over twice, landing back on its wheels. The Liberty was bent on almost every body panel; Albrecht suffered cuts to his hands and still has a sore neck a month later. He was evaluating the new-for-2002 compact SUV for an AutoFile road test, driving a 490-foot slalom laid out in a level parking lot at California Speedway. The course uses eight traffic cones in a straight line, 70 feet apart, for seven gates. DaimlerChrysler officials question the test methodology, its applicability to the way owners drive, the suitability of the test site and the driving technique. They also say no other testing agency or customer has reported an accident like this one. 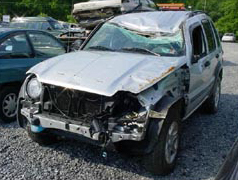 Albrecht’s speed in the rear-drive 3.7-liter Jeep Liberty Sport was around 40 mph, comparable to the best-handling compact SUVs tested previously. “I remember rounding the seventh cone and thinking I had this one in the bag,” said Albrecht. “The next thing I remember is an impact, and being tossed back and forth.” AW West Coast Editor Mark Vaughn, the other AutoFile test driver, was observing and timing the run from about 300 feet away from the center of the course. “On the second-to-last cone, the Liberty lifted its driver-side wheels off the pavement, then settled back down, and Pete made the move for the last cone,” Vaughn reported. The Liberty rolled, driver-side first, the A-pillar and roof first contacting the pavement just past the last cone.

Albrecht earned his master’s degree in mechanical engineering from Northwestern University and was employed in engine programs at both Bosch and Porsche AG before entering journalism as Road & Track’s engineering editor in 1987. He has been freelancing since 1988 and a consultant to AW’s test program since 1992. Liberty went on sale only six months ago, so there are no meaningful statistics about its accident record as yet. It is rated at two of five stars in the NHTSA’s rollover resistance ratings, suggesting a 30 to 40 percent risk of rollover in a single-car accident. The ratings, with one star indicating the highest risk and five stars the least, have been controversial. They are not derived from dynamic tests but calculated based on the track and height of the center of gravity. Most SUVs rate two or three stars; the only SUV with four is the minivan-based Pontiac Aztek 4x4.

NHTSA notes that 90 percent of rollovers happen not on pavement, as in this test, but when the vehicle leaves the road. The agency is developing a dynamic test standard to measure susceptibility to on-road rollovers, mandated by Congress to be established by November 2003. Many testing protocols are being evaluated; none resembles AutoWeek’s slalom, which is intentionally unique to the magazine. “Our slalom was not designed to induce a rollover, or even test for one,” said AutoWeek’s Detroit-based Road Test Editor Natalie Neff. “Its aim is to evaluate handling characteristics, especially in transitions. Typically, we find the limit when we hit a cone or spin out. We didn’t set out to roll the Jeep.” On the run just before the one in which the vehicle rolled, Albrecht spun the Liberty. During a typical test each driver makes eight to 10 runs in pursuit of the fastest time—the two fastest are averaged for the number reported in the road test. Spinning is not uncommon as the testers try various techniques and then push the subject vehicles to find their limits.

Hundreds of cars and trucks have undergone this same test, with the same two drivers using the same methods, since 1992. Only the Liberty has rolled over, though two other SUVs—the BMW X5 in July 2000 and the Land Rover Discovery in August 1999—lifted two wheels off the pavement, an event engineers refer to as TWL (two-wheel lift). Both the BMW and Land Rover were tested at Pomona Fairgrounds; testing moved to the California Speedway early this year, in part because the pavement is of better quality. After the accident, the Jeep, which had been loaned to AW by DaimlerChrysler, was impounded and the company hired an accident reconstruction expert. Gregory Stephens, a partner in Collision Research and Analysis with offices in Gig Harbor, Washington, has 14 years experience. Basing his evaluation on tire marks on the pavement and marks the vehicle made when it rolled over, Stephens determined it made two full rolls. He estimated the speeds involved at 37 to 42.8 mph. The yaw rate—its rotational motion around a vertical axis—was around 100 degrees/second when it rolled. That is, it was spinning out even as it tumbled.

He attributed the rollover to a “combination of circumstances” peculiar to the test. Nothing broke on the vehicle to cause the crash, he said. Stephens measured a variation in the pavement friction of up to 10 percent at crucial points beside the sixth and seventh cones. He suggested the Liberty may have slid on pavement with low grip and then hit the high-friction surface, helping to initiate the roll. A contributing element, Stephens said, could be the energy stored in the springs and chassis as the vehicle negotiated the extended slalom in a pendulum-like effect. Stephens presented his report to AutoWeek editors and Jeep engineers in a meeting Nov. 15 at Chrysler’s Chelsea, Michigan, Proving Grounds. Jeep vehicle development executive engineer Jack Broomall said he had driven a similar slalom without incident. “We’ve laid out what we think is a duplicate of your course and, frankly, we haven’t been able to replicate the result of your test,” said Broomall. “We can’t even get two wheels up.” The track at Chelsea differed in only one respect: The coefficient of friction was consistent. Said Broomall of the parking lot where AW tests: “We would never test there.”

He and vehicle dynamics engineer Ian Sharp said that Liberty had been subjected to a wide array of tests in development. These included slaloms with cones spaced at a more typical 100 feet; Consumer Union’s double lane-change maneuver (which has generated controversy for years, most recently when Consumer Reports rated the Mitsubishi Montero Limited “unacceptable” because it tipped onto two wheels); and several alternatives proposed thus far for NHTSA’s dynamic test. It doesn’t roll in any of them, the engineers said. Repeating AutoWeek’s test at Chelsea in a Liberty built for the purpose and identical to the one that rolled in California, Vaughn demonstrated the usual technique, first with Sharp aboard. Then Vaughn tried several runs with no passenger; after about half a dozen, the Liberty again lifted two wheels. Vaughn released the throttle, steered straight, and it came to rest, stable. Broomall and Sharp were surprised by the technique. Engineers told to average, say, 40 mph in a slalom, pass the first cone at 40 mph, apply just enough throttle to replace lost momentum due to scrubbing during the maneuver, and exit at 40 mph. That’s not how AW does it. Both drivers tackle the course as might weekend auto-cross competitors, striving for minimum time between the first and last cones. This entails entering at a higher speed and braking before the first steering input at the second cone. On exit, after the seventh cone, they typically drive past the eighth one under acceleration in a straight line, not attempting to turn. In between, they modulate the throttle to hold it at the handling limit by seat-of-the-pants feel.

The drivers evaluate the vehicle’s behavior under braking into the first turn, the ease with which it can be balanced by throttle inputs and steering through the rapid transitions, and its poise under acceleration. At the end, this information is compiled in a written report. While the average speed is measured, and reported in the magazine, the two drivers’ subjective evaluations about the vehicle’s behavior are as important as the speed. DaimlerChrysler questions the validity of such at-the-limits testing of an SUV, particularly one like Liberty that is designed to perform off-road. The fore-aft inputs from applying brakes at the start of the run, and throttle while cornering, Stephens suggested, contributed to the Liberty having pretty much all of its weight on the left front wheel just before it rolled.

Though the test Jeep was a 2wd model, it shares the long-travel suspension (control arms in front, live axle in back, coil springs and gas shocks all around) and high ground clearance (eight inches at the rear axle) of the 4x4. The design allows Liberty to tackle serious off-road challenges such as the Rubicon Trail. What did this rollover prove? AW didn’t set out to prove anything; there was an accident under extreme conditions that don’t parallel those seen in daily driving. The incident demonstrates yet again that SUVs handle differently than do cars at the limits. It makes us nervous to see such SUVs driven as they typically are, like normal compact cars. As Pete Albrecht appreciates, drivers ignore the repeated warnings at their own peril. (11/19/01)