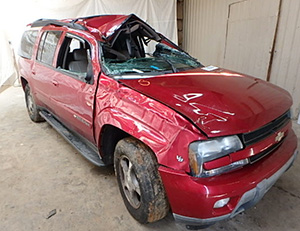 Chevrolet first introduced its S-10 Blazer line of compact SUVs in 1983. In 1995, the company decided to move towards a larger build for the Blazer, transitioning these vehicles into mid-sized SUVs instead of the smaller compact size. Four years later, in 1999, the TrailBlazer was promoted solely as an upgraded trim package for the Blazer. However, in 2002, this trim package was released as a separate line of mid-sized SUVs that eventually took over the Blazer's spot in the Chevy SUV lineup.

The 2002 first-generation TrailBlazer models had four-wheel drive standard, with the option of all-wheel drive with a certain trim. Additionally in 2002, Chevrolet offered the TrailBlazer EXT, which extended 16 inches longer than the regular 2002 TrailBlazer. This made room for up to seven passengers with a third-row seat.

Lastly, cosmetic changes occurred in the 2005 models, with an optional SS model released in 2006 for drivers wanting better performance out of the TrailBlazer. The line was discontinued in 2009, but Chevy has recently released the second generation of TrailBlazers in spring of 2012.

NHTSA Ratings for Rollover Safety in the TrailBlazer

The TrailBlazer showed some improvements over the previous Blazer model, getting its own set of upgrades with the addition of the SS package. However, these vehicles still maintained their relatively high center of gravity throughout redesigns. As a result, this tall profile has lead to the potential for rollover accidents.

The Chevy TrailBlazer only received three out of five stars for the two-wheel drive model in a National Highway Traffic Safety Administration test in 2007. The four-wheel drive model, established by 2002, showed slight improvement with a four out of five star rating. While this is better than its two-wheel driver counterpart, it still illustrates a potential threat if a driver turns too sharply or is struck from the side.

The Risk of Rollover Accidents in Chevy TrailBlazers

Rollover accidents are responsible for many severe injuries in large part due to the lack of safety features to prevent head and neck injuries in these incidents. These accidents occur when the forces exerted on the vehicle cause the center of gravity to tip over its supportive base. Due to the high center of gravity and narrow wheelbase on the TrailBlazer, rollovers are much more common than in sedans and even smaller coupes.

With only air bags and seat belts to protect motorists, rollover accidents can cause severe trauma to the head and neck, leaving a motorist with potentially permanent injuries.

The design of the Chevy TrailBlazer makes it susceptible to rollover accidents, which may lead to severe injuries for the motorists inside. If you or someone you love was injured in a Chevy TrailBlazer rollover accident, there may be legal options available to help you fight for compensation to cover your damages, such as medical bills and lost wages. To discuss this legal action in further detail with a knowledgeable and determined attorney, contact the Willis Law Firm today at 800-883-9858.