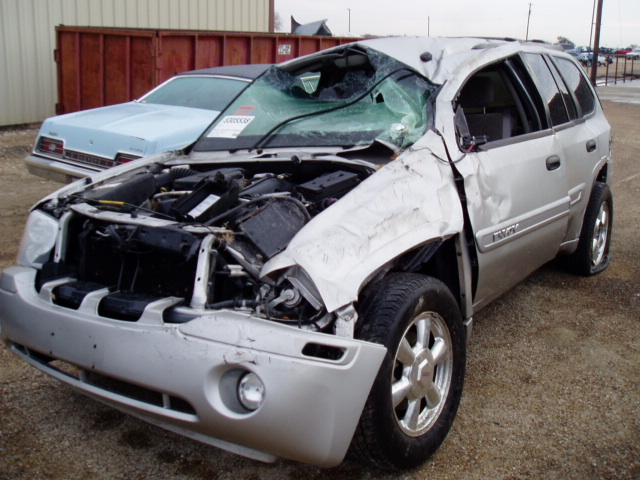 The mid-sized GMC Envoy was first released in 1998 as an upgraded version of the popular Jimmy line of SUVs from General Motors. As the GMC Jimmy was an offshoot of the Chevrolet Blazer, the Envoy and Blazer shared many of the same design choices and features. However, the Envoy also boasted a variety of upscale additions that neither the Jimmy nor the Blazer included.

The Envoy officially replaced the Jimmy in 2002, making it a direct competitor of the Chevrolet TrailBlazer, which was introduced in the same year. However, GMC also offered the Envoy line in an expanded, full-sized version known as the Envoy XL. This vehicle had a larger wheelbase, allowing for more passengers and cargo. In addition, the Envoy XUV was released in 2004 to provide a hybrid between an SUV and a pickup truck. This model had a much larger cargo area, which could be partitioned from the rest of the vehicle. Both of these variations increased the height and wheelbase of the Envoy.

The Envoy was improved in 2006 with the addition of a new standard stability control system, a tire pressure monitor, and standard cruise control. The 2007 models saw the addition of side-curtain airbags to improve the overall safety of the Envoy.

While these additions improved the overall safety of the Envoy line, they didn't necessarily tackle the persistent problems associated with the Envoy's rollover risk.

Rollover Risks for the GMC Envoy

The GMC Envoy and its variations suffer from many of the same rollover concerns as other SUVs. Primarily, these vehicles are too tall in comparison to their width. As a result, the relatively narrow wheelbase combined with the height creates a high center of gravity, which is easily unbalanced during a sharp turn, emergency maneuver, or collision. If these forces are sufficient, they can cause the top of the vehicle to tip past its high center of gravity, resulting in a rollover.

NHTSA Ratings for the GMC Envoy

The National Highway Traffic Safety Administration ran substantial safety testing on the GMC Envoy, showing a risk for rollover accidents that matches similar SUVs in its class. With the two-wheel drive model scoring three out of five stars and the four-wheel drive model scoring an improved four out of five stars, these vehicles still are somewhat lacking when it comes to rollover safety. In large part, this can be blamed on the high profile of the vehicle.

Although the GMC Envoy was discontinued after 2009, many people still drive these vehicles, putting themselves and their loved ones at risk of rollover accidents. An injury sustained during a rollover accident can be devastating, easily extending beyond the physical pain and placing an enormous financial burden on a household due to the cost of medical bills, lost wages, and other economic difficulties.

If your injuries or the injuries of someone you love were sustained in a GMC Envoy rollover accident, there may be legal options available to help you seek financial compensation. For a no-cost consultation regarding your next steps through this process, contact the Willis Law Firm today at 800-883-9858.