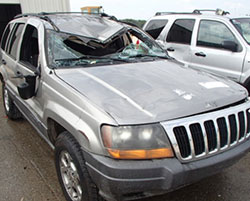 In 1974, American Motors Corporation's Jeep division produced the first vehicles to bear the Jeep Cherokee name. This full-sized SUV was redesigned in 1984 to become a compact SUV, which remains the common design for the Cherokee. In 2002, the Cherokee was renamed within North America as the Jeep Liberty. The Grand Cherokee was added to Jeep's line-up in 1992, providing a mid-sized option for consumers. This line of SUVs has been extremely popular among consumers, but has also been responsible for many very serious accidents that were caused by the vehicle rolling over on the road.

The Risk of Rollover Accidents for Jeep Cherokees and Grand Cherokees

Rollover accidents are particularly common among SUVs, as these vehicles have significantly taller frames than sedans or coupes, but don't have necessarily wider bases. This means that an SUV's higher center of gravity is more likely to pull the vehicle to its side in the event of a tight turn or collision. If these forces pull the vehicle over, a Jeep may roll over several times before it finally comes to a halt.

These accidents are extremely dangerous for a number of reasons. Specifically, these accidents often cause severe trauma to a person's head or neck, as these areas may not be adequately protected during a rollover accident. Additionally, the roof of the vehicle may not be able to support the weight of the vehicle itself during a rollover accident, causing it to crush. Roof crush injuries can prove very serious, often leaving injured motorists with permanent or severe neck and/or head injuries.

The 2012 Grand Cherokee received four out of five stars in the National Highway Traffic Safety Administration's rollover safety ratings. On the other hand, the 2012 Jeep Liberty received less successful ratings, only receiving three of five stars. This is due in part to the smaller base of the Liberty, which heightens the center of gravity, making it more likely for the vehicle to roll over during a sharp turn or as a result of a collision with the side of the vehicle.

While many of the safety features added to the Jeep Grand Cherokee and Liberty have worked to reduce rollover risks, the NHTSA still recognizes a significant rollover risk from both of these vehicles. Motorists injured as a result of these rollover risks may be entitled to file a lawsuit against Jeep due to the existing rollover risks that the company has repeatedly failed to address in the design of the vehicle.

In addition to design concerns, malfunctions with brakes and tires can drastically increase the possibility of a rollover. Manufacturers may also be held responsible for these problems when they cause a person to be injured in a rollover accident or suffer further injury in such an accident.

If you or someone you love has suffered an injury in a Jeep Cherokee rollover accident, we may be able to help with the process of filing a lawsuit to pursue compensation. For additional information about your rights and options, contact the Willis Law Firm today by calling 800-883-9858.